What do you want to be when you grow up?

As kids, that question bombarded us, and, depending on when you were born, you gave certain answers. Unless you were one of the mavericks; then you shocked the inquisitor with your reply.

Reach for the Stars

Like Sally Ride. I’m sure Sally Ride shocked people when she became the first and youngest American woman in space in 1983 – at the age of 32. Born in 1951, the same year I Love Lucy first aired (another maverick); Ride graduated with a degree in physics and English, eventually earning a PhD in physics from Stanford. After joining NASA, and prior to her first shuttle mission, media asked her gender-biased questions like, “Do you weep when things go wrong on the job?” But even though her mission was historic, unlike the media, Ride didn’t see herself as a female astronaut, she just saw herself as an astronaut.

Ride was a STEM maverick. Now we are fully aware of the importance of STEM for everyone and guide young women to understand and love STEM. Supporting #WomenInSTEM areas is essential to innovation and education for our country and women themselves. #Women in STEM careers earn 33% more than those in non-STEM occupations – experiencing a smaller wage gap relative to men.

Now the answer to the “What do you want to be when you grow up” question is no longer defined by your gender. It’s defined by your imagination and your dedication to education. On International Women’s Day, let’s all take the #PledgeForParity to ensure all can reach the stars. 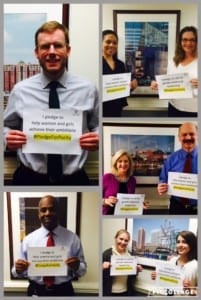